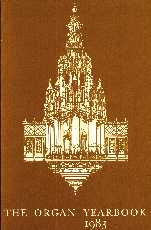 Article out the Organ Yearbook 1983 by L.A. Esteves Pereira Portugal

Since the publication of my article on the organ of Faro, I kept an interest in this organ and the two others said to have been built by J.H. Hulenkampf. Over the past two years, two Brazilian scholars joint me working on related problems, researching in archives and comparing the Faro organ with others.In Lisbon in 1752, Father José de Oliveira bought an organ from the builder Joâo da Cunha at a cost of 1,200,006 reis; the receipt is dated 26.06.1752 (Arquivo Historica Ultramarino). The organ was dismantled, packed and shipped to Brazil, the whole (including the case) in eighteen boxes, complete with instructions for reassembly, since the builder seems not to have taken the trip. Arriving at an unnamed Brazilian port, it was taken by road (together with a tower clock, cases of coins, papers, books) to Ouro Preto (present-day State of Minas Gerais) and from there to Mariana, a nearby town and capital of the diocese. In the cathedral the organ was re-erected and is still there today. It was said that the organ was a gift of King John V to the bishop but it cannot be so, since John V was already dead when the organ was bought; perhaps it was a gift of the next king, Joseph I (1714-1777). Either way, the organ was delivered to Mariana at a cost of 1,995,196 reis. The cost of carriage being higher than the cost of the organ itself. According to an inscription inside the organ, it was inaugurated in 1753. In 1974 the Instituto Estadual do Patrimonio Historico e Artistico de Minas Gerais commissioned a local technician, Jose Carlos Rigatto, to investigate the organ and report on its condition and possibilities of restoration. According to the report of 24.07.1974, the instrument was in a very- poor state and needed a complete restoration. At that time, the stoplist was as follows:

This specification, certainly not the original, shows the work of several builders. The organ was found to be a two-department instrument, its case showing a different architecture from Portuguese organs of the time though much like Faro, which too has Great and Brustpositif. By the end of the 1970's it was decided by the Brazilian authorities to commission the restoration of the organ, which was sent to the firm of Beckerath (Hamburg) during 1978, in the absence of competent builders in Brazil.

During the restoration work, Father Marcello Ferreiro a native of Minas Gerais, spent six months in the Beckerath workshop studying the Mariana organ which until then had been assumed to be of German manufacture. Markings on the pipes and even the original stoplist would be of German origin, it was thought. But after reading the report of the Faro organ, Father Marcello noted the resemblance's between the two organs and after discussion and examination we agreed on the following hypotheses:

-Probably Joâo da Cunha did not alter the organ, whose chests were already divided into treble and bass.

-The Faro organ was profoundly altered by the Italian builder Caetano Oldovini in 1767, who added horizontal reeds and rebuilt the great chest, as well as adding other stops.

-From documentation, we assumed the Faro instrument was built or installed by Johannes Heinrich Hullenkampf (Joâo Henriques Hulemcampo), a Hamburger and pupil of Schnitger. The contract for building or installing (it is not yet clear which) was made in 1715 or 1716. Hulemcampo received contracts for organs in the Franciscan monastery of Lisbon (1711), Faro Cathedral (1715) and Carmel monastery, Lisbon (1722). Of these, the first and third seem to have been destroyed by the Lisbon earthquake of 01.12.1755.

-Gustav Fock (in a letter of 28.10.1964) referred us to the Groningen report of Samuel Meijer (1853) who noted that in 1701 Schnitger made two organs, each of 12 stops, 2 manuals and a single bellow and sent both to Portugal. Faro's stops can be reduced to about 15 before Oldovini's additions. Due to its recent restoration, the original Faro stoplist is very uncertain.

-The Mariana organ was probably the same size as Faro 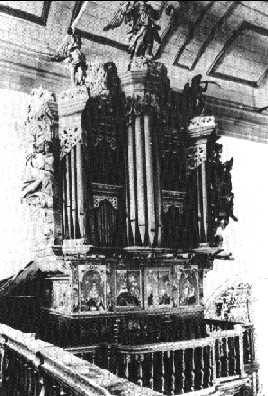 From such a comparison one can make further conjectures

In the Faro instrument, Olovini retained the essentials of the Hulemcampo organ although he made a new chest for the great, modifying some stops and adding others.

The Contrabaixo added (8 stopped wooden pipes) for the lowest octave.

The open flautado was retained because they gave the case- pipes (43 pipes, three towers of 7 pipes, two flats of 11 each; two must be dummies, because there are four more pipes, made of wood inside); the Voz humana (sharp Diapason drawn with the previous stop) is Oldovini's Italian celeste copied by Portugese builders in the later eighteenth century; the Bordao is actually the octave of the Stopped Diapason 8' discarded by Oldovini: there follow three original Hulemcampo chorus stops; the Cheio 4 filas replaces Hulemcampo's Mixture of 15.19.22, being higher-pitched in the Italian fashion; the Cheio 2 gilas is the original Rauschpfeife (?) of Hulemcampo, used only in the bass, the treble replaced by Oldovini's Corneta; perhaps the half slides of the Clarim and Trombeta replace another reed by Hulemcampo (Voz Humana 8') - the two new half-slides were conveyed to the front for the horizontal Trombeta, the dummies above the two flats are original; and in the Positive, Oldovini kept all the ranks and chest, modifying only the 'Sesquialtera' and replacing the Dulcaina by a Mixtura.

In the Mariana organ, we can think that the original chest and pipes were not changed by Joao da Cunha, and after a competent restoration it could return to a condition close to the original.

The contract signed by Hullenkampf and the Prior of the Monastery of St. Francis, Lisbon, bears the date 20.8.1711. It was stated that the organ was to be built with more refinements and stops than the instrument in the Church of the Misericordia. In the Mariana organ is the coat-of-arms of the Franciscan order, held by the top angel, and we can assume that the St. Francis organ and the Mariana are one and the same. Also, the arrangement of the second manual is more in the Portuguese manner, i.e. an echo organ at floor level though without the brilliance of high-pitched Mixtures and strident reeds. We know that two organs by Schnitger were supposed to have been exported to Portugal. We believe that the drawings for the cases came with the instruments but were actually built locally. Portugal had and still has very fine craftsmen in the art of wood-carving, gilding and painting; further investigation of the materials would help to clarify the matter, for if the timber is oak (so-called northern oak), the cases may have been made in Germany, and if it is chestnut, the cases were probably made in Portugal. It is possible that the two instruments (ordered by the King John V) were gifts to the Franciscan monastery and to Faro Cathedral, hence there being no mention of expenses in the cathedral books. And perhaps the Franciscans were disappointed with the organ received from Germany and ordered a new one from Hulemcampo, followed ten years later by he monk of the Carmel; the Franciscans can then be supposed to have sold the first organ to da Cunha, who shipped it to Brazil. In such a case, it is also possible that both the Faro and Mariana organs were originally made by Schnitger who sent them to Portugal.

We wish to thank Dr. Ivo Porto de Meneses (Federal University of S. Paulo) and Father Manello Martiniano Ferreira OSF for the information, which made these notes possible.