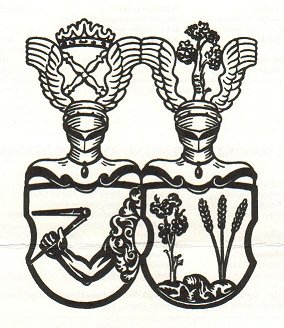 His life and career in a nutshell.

Click at the picture to enlarge
This picture is from the balcony of the church in Golzwarden. Possibly the figure in the middle is Arp Schnitger.
This hypothesis was formulated by Dr. Dietrich Diederichs-Gottschalk. (01) 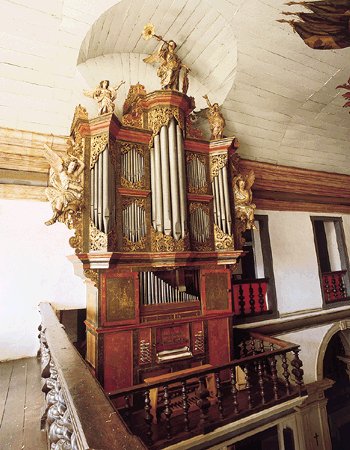 Arp Schnitger is considered the most important organbuilder of the Baroque period in Northern Europe. His instruments in the churches of Northern Germany and Holland were the largest of his time. Some instruments were exported even to Russia, England, Spain, Portugal and Brazil. No other organ-builder of the past has had so much influence on organ building in the 20th Century as Arp Schnitger. The North German structure of spatially separated, tonally independent works (Rückpositif, Hauptwerk, Brustpositif, Oberwerk and Pedal) have become a determining factor in the organ building methods over the last sixty years. Schnitger took over these principles from his predecessors, developing them to their utmost consequences. Fantasy, artistic principles and logic merged in Schnitger's instruments on the highest level relating to craftsmanship. 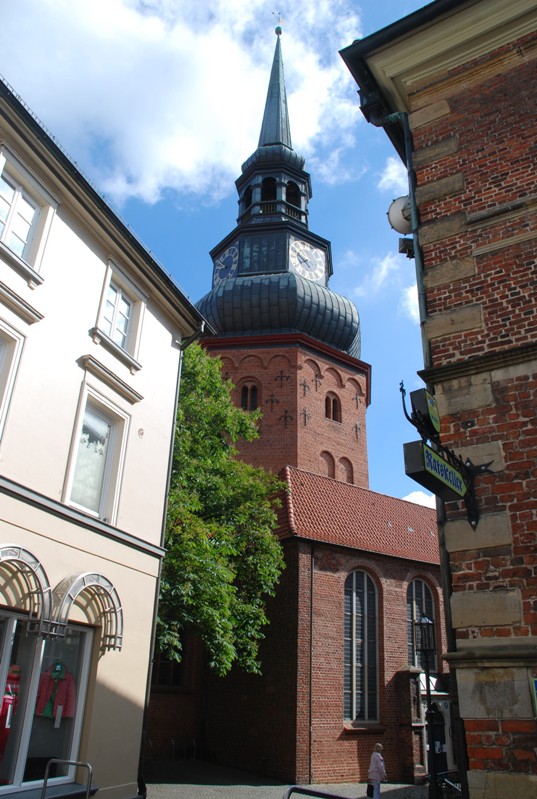 The greatest fascination, however, is the sound of the Schnitger organs. Schnitger integrated the rich tradition of Renaissance and Early Baroque organ building into his own style. In many cases he integrated stops from a former instrument into his new masterpiece and achieved a sound which enables us today to perform the North German organ repertoire of the entire 17th century and the first decades of the 18th century in an ideal way.
Schnitger succeeded, by his concept of brilliant mixtures and (full-length) grounding reeds in fulfilling the novel 17th century organ task of accompanying the congregation. The sound of the full organ, the plenum, was stronger, fuller and firmer than its predecessors'. Schnitger's success was connected with the homophonic quality of his plenum sound, which was quite suitable for the accompaniment of the congregation's singing. The polyphonic quality of the separate stops remained. His style influenced other organ-builders and his influence was visible throughout the 18th century and even far into the 19th.

Unparallelled was the size of Schnitger's workshop and the number of large projects in the years around 1700. Apart from his Hamburg workshop there were groups of co-workers who set up instruments from Stade, Bremen, Groningen, Lübeck, Magdeburg or Berlin. In the final years of his life and after his death in the year 1719, many made themselves independent and resumed the Schnitger style. Long continuation of his school contributed substantially to the fact that many Schnitger organs were professionally maintained, remained well playable and were not replaced by new ones. 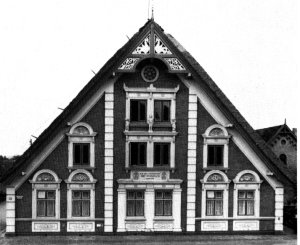 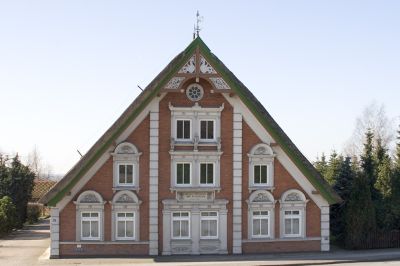 Under the prerequisite of the technology and the working conditions of organ-builders in the late 17th and early 18th century the number of large-scale projects (new and alterations) by Schnitger is almost unbelievable. Beside some instruments with four manuals, we count 26 with three manuals and almost 20 larger two-manual ones with free pedal. The workshop-list covers more than 170 instruments, among which the largest ones of his time. The list in Gustav Fock's fundamental biography on " Arp Schnitger und seine Schule " (Kassel 1974) must be completed with some further organs. Schnitger was highly esteemed, especially for the quality of his reeds. His original and well-restored reeds show a stability of intonation and pitch, which is still exemplary today. (Photo to the right is from Gerhard W. Kluth: www.kulturfoto-lieser.de)
At the website http://de.wikipedia.org/wiki/Datei:Orgelbauerhof-LF.jpg you can find a photo of the "Orgelbauerhof" around 1900. 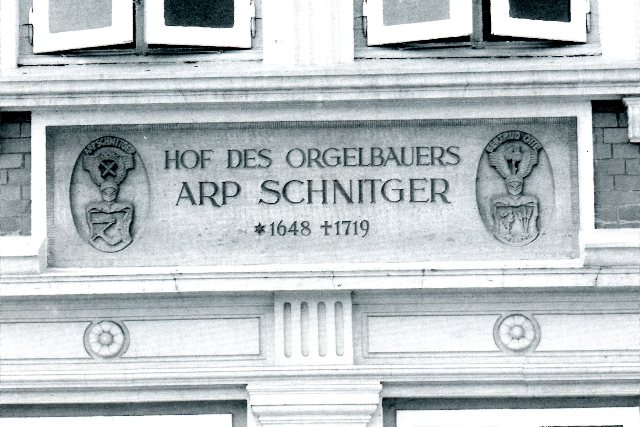 Due to many adequate restorations in the last twenty years, particularly by Jürgen Ahrend of Leer-Loga, the artistic dimension of the Schnitger organs has become visible. Schnitger's building methods make it possible to produce a variety of sound with only a limited number of stops, which has never been exceeded, neither before nor later.

Arp Schnitger was not born in Hamburg, but in Schmalenfleth near Golzwarden, in the year 1648, the son of a carpenter. After young Arp had learned the carpenter's trade from his father, he went into the organbuilder's workshop of his cousin Berendt Hus at Glückstadt in Holstein. He learned much from building a new organ in the Cosmaekirche of Stade .
At the request of the Hus's widow (Hus died in 1676), Arp Schnitger completed the contractually concluded organ work, mainly concerning a new organ in the Wilhadikirche of Stade . So Schnitger was relatively early independent. Further knowledge of organbuilding he must have acquired in the school of life and through his occupation. For example when changes were envisaged, he studied organs by important predecessors, such as Scherer, Fritz and Stellwagen, which were present all around. Further he gained expertise by exchanging views with prominent organ masters like Dietrich Buxtehude, Vincent Lübeck, Christian Flor, Andreas Werkmeister etc., and by studying the technical literature.
Due to the two excellent organs in Stade he was requested to build a large new organ in the Nikolaikirche of Hamburg. This was for Schnitger a great opportunity, as this was one of the largest churches of Nothern Germany, and Hamburg being the centre of organ-playing and organ-building. Schnitger soon moved completely to Hamburg, acquired there the civil rights, took on an extra number of associates and married also. 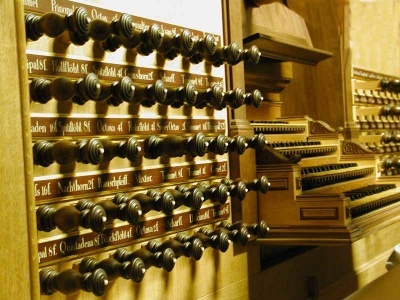 Building of the Nikolai organ (1682 to 1687) became the crucial step in his career. In almost five years of restless activity they built an organ with 67 stops, four manuals and pedal for St Nikolai's.It was the largest organ in the world and because of its solid design a triumph of organ architecture. Meanwhile Schnitger and his assistants built ten more organs, some quite large, in the space between Hamburg and the Dutch border. At the time the organ in St. Nikolai's excited the same sensation as for instance a major technical achievement nowadays. The active commercial town of Hamburg with its extensive art relations was the suitable place to spread the name of the designer as that of the great master of its time, both in the coastal areas and far inland. In the remotest villages of Germany and Holland his fame penetrated. In organ documents from around 1700 one can frequently find expressions such as: "Who also built the large and precious organ in Hamburg".
How the professional world saw the building of this organ, we can learn from Dietrich Buxtehude. In May 1687 he got permission from the church for a four-day journey to Hamburg to visit the organ. After playing the instrument, Buxtehude tried to convince the churchmasters in Lübeck that Schnitger should modify his organ in St. Marien's. But, regrettably, the negotiations did not lead to the result he had in mind. Unfortunately the Nikolaiorgel, Schnitger's largest organ, was burned in the massive townfire of 1842.

Fortunately, Schnitger's second-largest instrument, the organ of St. Jacobi's in Hamburg, survived. Already during the construction of the Nikolai organ the churchmasters of St. Jacobi's decided to have their old and ramshackle organ thoroughly renewed by Schnitger. Before beginning the building, Johann Adam Reinken at St. Katharinen's was asked for advice. The envious and ambitious Reinken feared that the new organ would place his own organ in the shadow and expressed the opinion that a Prinzipal 32' was not necessary. A Prinzipal 16 ' of somewhat wider mensur??? should suffice. But Arp Schnitger did not follow Reinken's advice and stuck to his own design. In the new organ he used the good ranks of the previous organ by Hans Scherer the Elder and Gottfried Fritsche in a new splendid disposition, still holding us in admiration to-day. In the lay-out of the disposition Schnitger exceeded all his predecessors. All his dispositions are well-designed with the appropriate reeds and flue-pipes and thus form closed unities in themselves. Very important in the structure is the large pedal-section. In St. Jacobi's the pedal consists of fourteen stops. Reinken's instrument at St. Katharinen's counted no less than sixteen. As well known, J.S. Bach remembered gladly Reinken's fully occupied pedal and the clear speech of Prinzipal 32 ' and Trombone 32 '. The pedal was filled with stops ranging from melody-prominent flue-pipes to the Nachthorn 2 ', and with reeds up to the Cornett 2 '. Schnitger's reeds met with the highest approval from his contemporaries. The reeds possess great fusion abilities and on this quality the grandiose effect of his pedals is mainly based. With these richly filled pedals the powerful Pedal soli, characteristic of the Toccatas and Preludes by the North German masters, become very effective. Besides these two organs in St. Nikolai's and St. Jacobi's, Schnitger built almost twenty further organs for Hamburg. 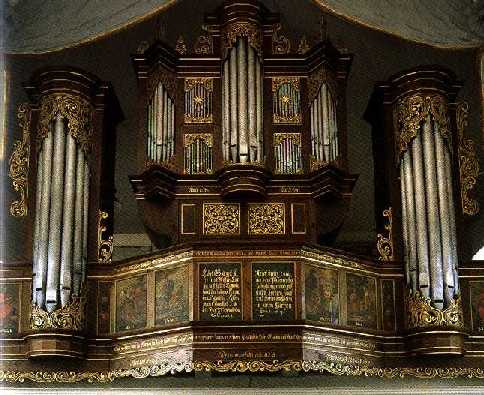 Already early his business expanded with amazing speed over Holland and the northern part of Germany. We find him working between Niederelbe and Niederweser, particularly in "das alte Land" (the Old Country) near Hamburg and in the cities of Stade, Buxtehude, Bremen and the country around, as well as within a wider range between Elbe and Weser to places as remote as Zellerfeld in the Harz. In this wide area the organs of Neuenfelde, Mittelnkirchen, Steinkirchen, Stade (St Cosmae's), Lüdingworth, Cappel and Grasberg are still extant to day. 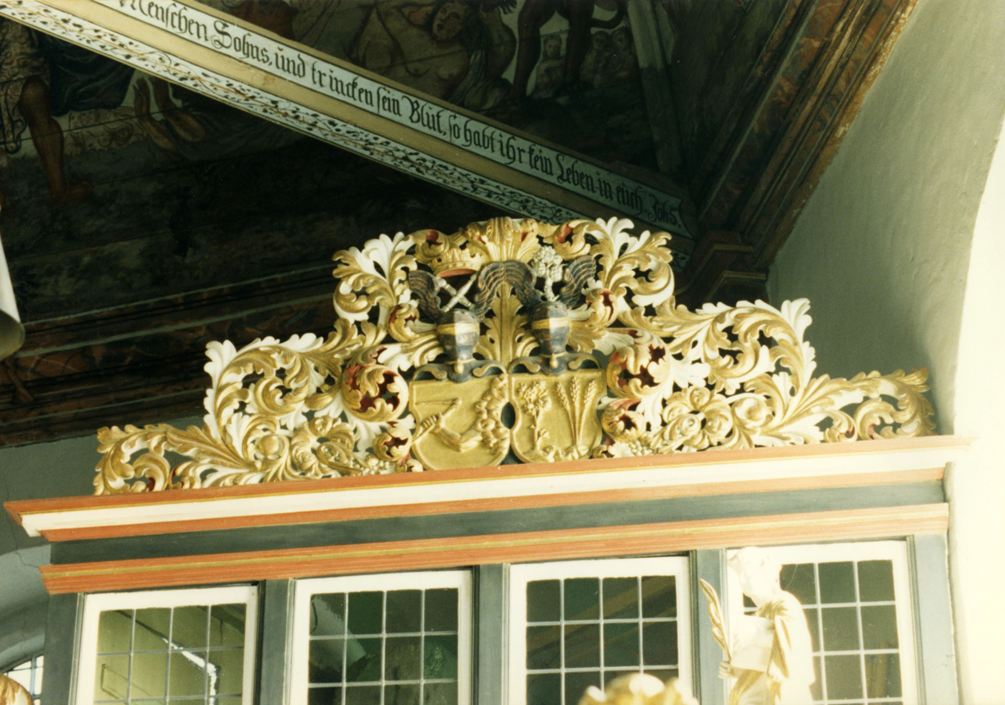 Coats of arms from Schnitger in Neuenfelde
Photos above and below from Dale C. Carr 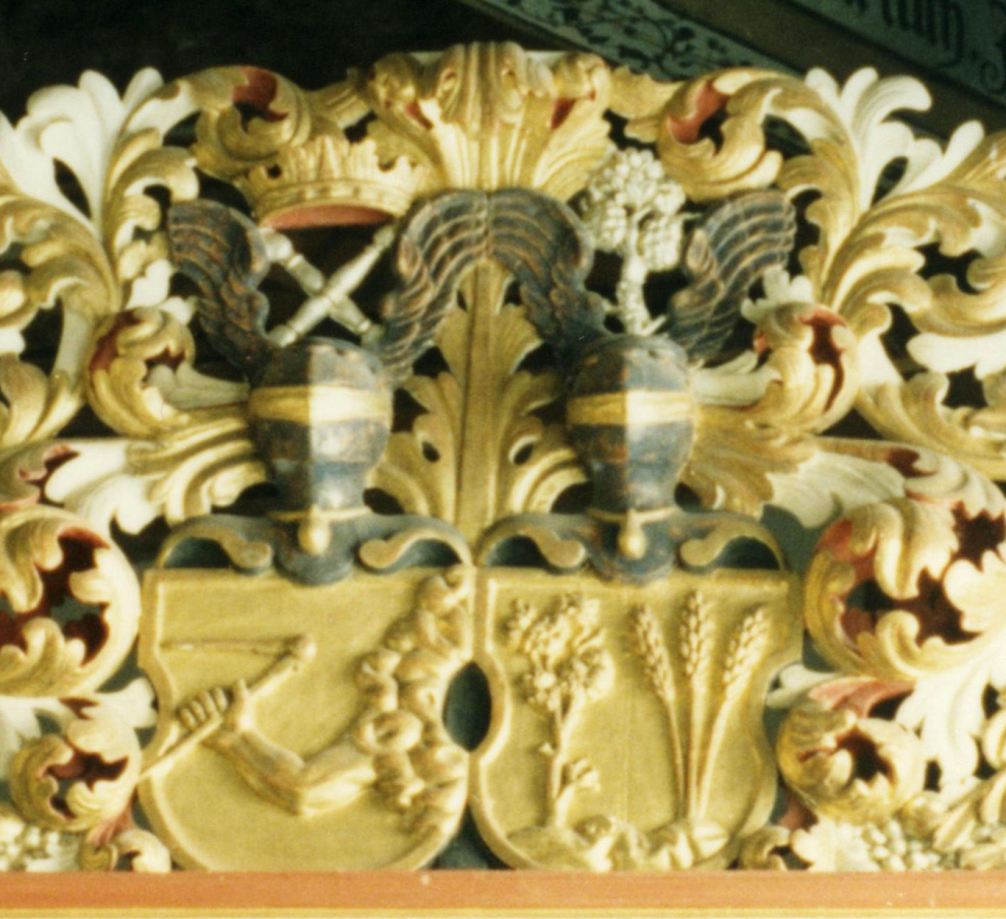